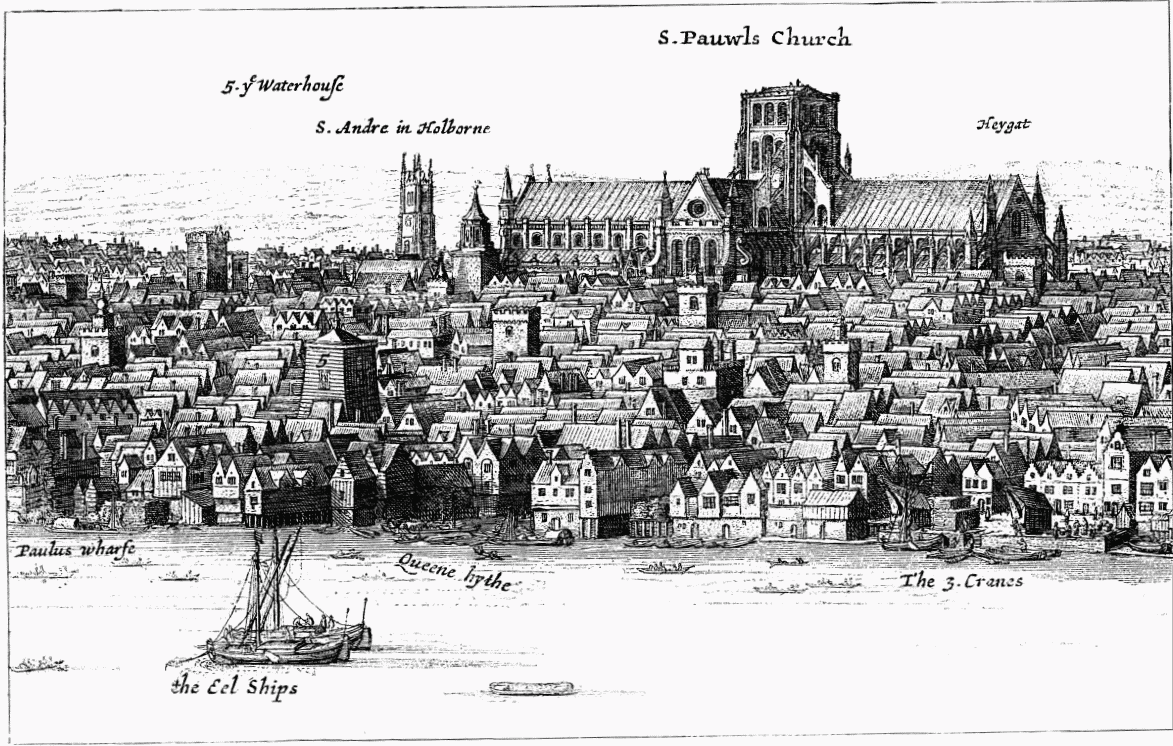 Click on this to see the detail of pre-Great Fire London:Picture from http://www.Gutenberg.com

Madeleine sat in her geography lesson, attending carefully to the slide show.

She was learning about how man could shape his environment to make it safer. Open places, buildings which overlooked each other, wide open, light spaces: these were all less likely to shield criminal activity.

And then the geography teacher showed a picture of a great office block and an underpass below. This, she said, was less desirable.

“Miss, ” she said politely, raising her hand: “I live there!”

It was indeed our town. A new town, an intended Utopia, designed to serve its satellite housing estates with walkways which went under the roads. And now everyone drives and the subways are generally deserted .

The geography teacher coloured. Ideally, to illustrate geography which fosters criminal activity, perhaps she should have stuck to London. Felix and I use those subways to cycle all the time, and the crime rate in our new town is comparatively low.

No: a London tower block of the right persuasion might do it. Or how about a city which no longer exists: say, London before the fire?

Now there was a den of iniquity. Narrow lanes and cramped overhanging houses made the London Streets dark and unsavoury places.  So much so, that really wealthy people were uneasy even about stopping for too long in case someone helped themselves to the contents of their carriage.

They had a solution, of course. They paid a poor person.

It was the custom to employ a ‘running footman’. They had to be tall and athletic because, while the carriage rattled across the unforgiving cobbles of London, the footman must run beside the carriage. It was his job to clear the way for the carriage, and pay tolls, and generally ease the passage of the very rich indeed through London.

All the best families had one. They were a status symbol, running footmen. They could clear pigs and chickens and still retain energy to announce their master’s arrival at their destination, though how they had the breath I will never know.

It is an outrageous division of labour. Tell you what: I ride in comfort in this carriage and you jog obediently outside and do all my dirty work.

After the Great Fire the need for them was not so great, the streets being wide and light and cleaner than before.

But it was a footman who had the last word on the practice.

And it was with the last nobleman to proclaim his status by keeping a running footman: the Marquess of Queensbury.

It is recorded that the Marquess used to interview running footmen by standing on his balcony in Piccadilly, watching candidates running up and down the street and timing them. Before they interviewed, they must be lent an expensive kit: full livery, made from the finest of materials. Clothes most men would covet, to keep the London winters out.

So one day, the Marquess discovered a really excellent runner. He was head and shoulders above all the other candidates, tells Edward Walford in Old and New London. He would do magnificently tearing alongside the Marquess’s carriage.

Which goes to show that all the light and space in the world cannot arm a Marquess against a wily criminal.

42 thoughts on “Running beside the carriage”