So we were strolling through the Museum Of London. We had gone through it with a fine toothcomb, top to bottom, and we were nearly at its conclusion, and I saw a reconstructed parade of old shops and shot towards it.

And realised my husband was not there.

He hung back, next to a set of old theatre posters. 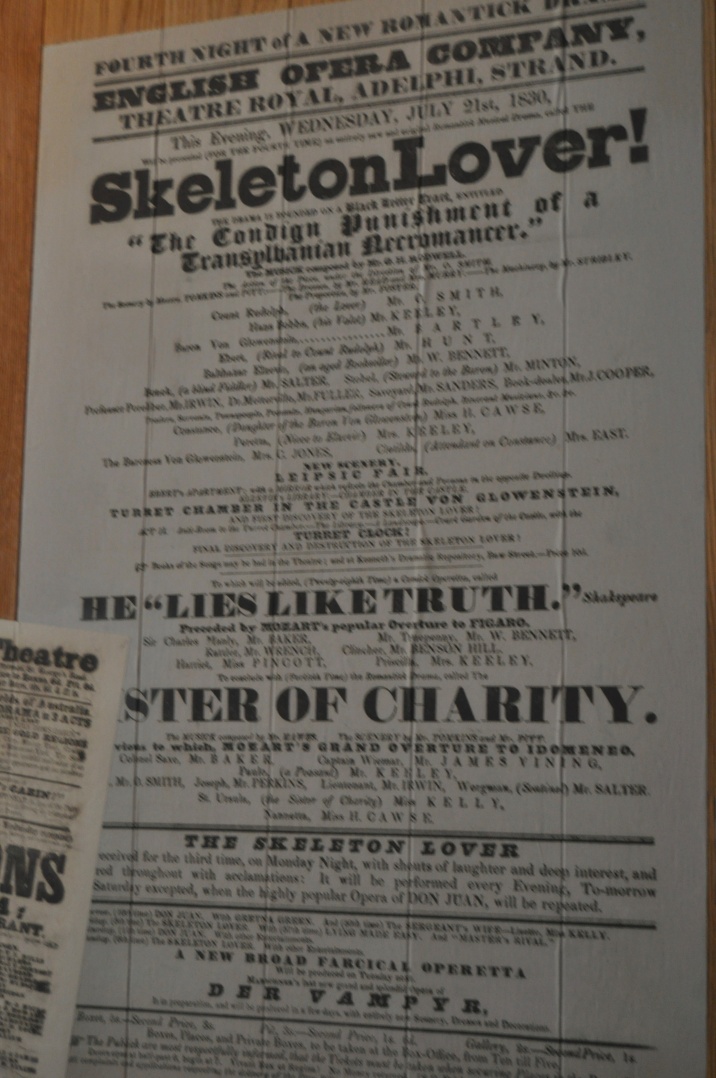 “What do you notice about these?” he asked, with the air of a magician undertaking the great reveal.

I stared blankly at it: a poster for an opera at The Theatre Royal for a lurid dramatic concoction called “Skeleton Lover. “No, I can’t see anything unusual,” I said slowly. Scanning, I caught the subtitle: “The condign punishment of a Transylvanian Necromancer.”

And there was I, thinking that the preoccupation with vampires started in 1897 with Bram Stoker’s Count.

Silly me. Of course not: lift the veil and you will see it began with one of the great poet-Lotharios, Lord Byron.

A well-travelled man, Byron’s Grand Tour of 1809 and 1810 took in Athens. There he learnt of the Turkish custom of throwing adulteresses to their death in water, and wove a fantastical tale which introduced us to another of his finds: the vampire. His hero,  lover of a wronged woman thrown to her death as an adulteress, stood to be condemned to become a vampire because he had killed her accuser. He would be compelled to kill those he loved by drinking their blood.

The Giaour sold fast and furiously. People loved vampires and the gothic.

In 1816, Byron spent a summer on the shores of Lake Geneva. He had chosen his companion well:  a brilliant physician, John William Polidori. And who should come to stay but Percy Bysshe Shelley and his fiancé, Mary Godwin.

It rained, incessantly. And they all set to reading fantastical novels, like Phantasmagoriana, the lurid tales of the dead written by Sarah Elizabeth Utterson. And before long, surrounded by each other and stranded by rain on the edge of that vast place, two of them spawned stories. Mary Godwin – later Shelley – wrote Frankenstein.

And Polidori wrote The Vampyre: a novel which feaured a most Byron-like Lord, Ruthven, who is partial to killing others by drinking their blood. It did not end happily: a dear relative of the hero is killed on her wedding night after agreeing to marry Ruthven.

And  the world went vampire potty. Charles Nodier read Polidori, penned a  play about the blood-sucking undead and all Europe could talk about was vampires. Nikolai Gogol, Alexandre Dumas, Leo Tolstoy, Sheridan Le Fanu; they were all at it.

So our 1830 poster was well into a craze; an apetite for the undead.

How extraordinary Mr Stoker’s adaptation of the tale must be, then, to have created such a stir in view of all those predecessors! It was not an overnight success like its predecessors, though the critics loved it.

I can well see why. It shows us clearly how a most original mind can take the oldest, stalest of material and rework it into brilliance.

28 thoughts on “A Fascination With Vampires”