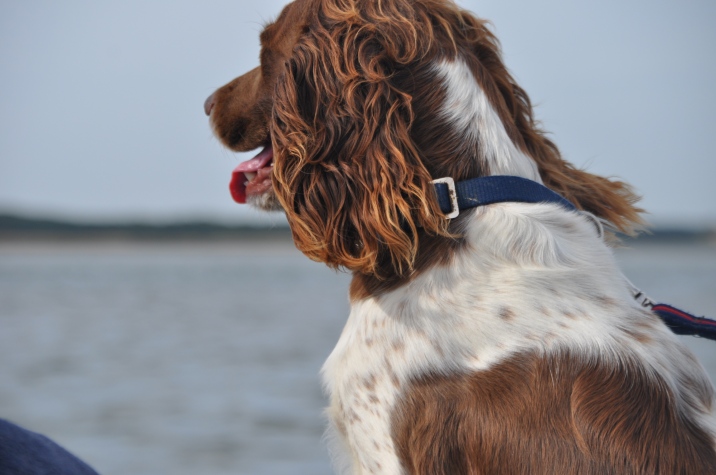 The day we went to see the seals, we did not bring the dog.

We deliberated long and hard. The dog objected strenuously to being left behind in the little forge-worker’s cottage turned holiday let. He wanted to be with us, and who could blame him; for if we left this strange place, would we ever return to collect him?

We did that pantomime thing where every time we tried to close and lock the front door the dog would, somehow, be on the wrong side of it. We would shut the door, turn the lock and turn to see the dog sitting in the big old Mercedes.

Macaulay employed the tactics of those we were about to see: he turned on seal eyes. This is easy for dogs, because they are related to seals. Pinnipeds (seals, sea lions and so on) and dogs are the same order, carnivora. And they are members of the sub-order caniformia, which literally means: “dog-shaped carnivores”.

So he turned those big brown limpid pools on us and we felt terrible. But our dog is highly territorial. He barks like a fascist dictator. We could not have him turning our visit to the spit off the North Norfolk coast into his own private rally.

No, Macaulay, we admonished him, and he resented us with all his small doggy might, which is quite considerable.

And turned up at the boat to find it being supervised by Muddles.

Muddles was a spaniel, with long cavalier foppish ears and a firm sense of being one of the team. This was what Muddles did most days: he trotted at his master’s wellington heels all the way to the boat and jumped in, taking the space a tourist’s bottom might otherwise have taken. Fleetingly I wondered: when the boat is full, does Muddles get displaced, and a further £10 made?

Somehow, I thought not.

There were many other boats going out at the same time. The tide was right, and time and tide wait for no man, or dog. There was another dog on the boat too, whose name I did not catch. I felt a heel.

And then the boat started in the kind cool air of a beautiful Summer morning, and Muddles took long draughts of the air, and let his ears fly out behind him. Everyone petted him, friends and strangers alike, and he acquainted himself with the other dog. An English phenomenon. Dogs like that deserve songs to be written about them. The ballad of Muddles.

Life on board a boat, on a calm day, is good. It showed on the faces of the tourists. They were full of wonder. And the dogs were the same. They smiled.

And when we reached them, the dogs’ cousins gazed utterly unafraid at us, and leaned over and sported and spoke together. They swam after the boat for sheer curiosity and love of the species sitting in it. They showed the same affable personableness as the dog sitting at home in the holiday let does for us.

We loved the company of Muddles and the tourist dog, but we hared home to find our little member of the carnivora order.

We longed to see the same content smile on his face as on all of theirs.

34 thoughts on “The Ballad of Muddles”