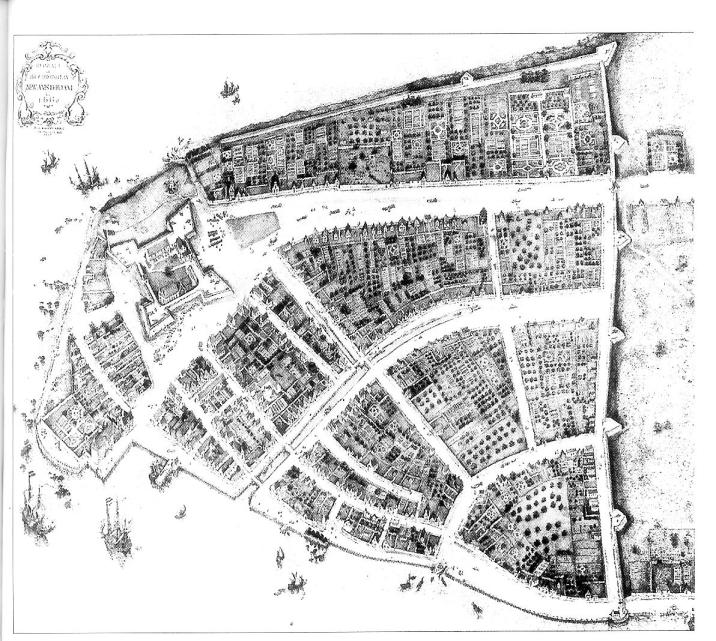 “Did you get away during the Summer?”

“We did actually. We managed four days in New York.”

And then you watch the reverberation in the face of your listener. Layers and layers of expression. Reflection of respect for the vast distance; the superlative shopping experience; the spectacle, the sights.

But it was none of that, I struggle to explain. That’s not why I went back.

I went back because of the pictures of New Amsterdam.

They are what held me, and continue to hold me, in sway. The knowledge of the little walled settlement with Krijn Frederijcke’s  defensive fort; of the ordered streets of houses, each with a long garden; the streets askew, refusing to be ordered into a grid. That stone thatched headquarters, counting house of the Dutch West Indies Company. All those wooden dwellings.

And as you walk along on the ground the old places are only just discernible, in the street patterns. You can visit the sites where things were, but you can’t see how it was.

But when you rise high above it the layers of history unfold, because the grand scale reveals time’s passing once again: the island, with its two rivers; Broadway’s individuality; the sundry levels, with the smallest buildings often the oldest. All that farmland, all those neat little gardens and clapboard houses gone, to be replaced with a great, audacious park in the middle of the island.

I spent half an hour at the top of the Empire State Building.  But had I had the choice, I would have taken a packed lunch and been up there all day.

For it is only up there, in the rarefied heights, that New York shows its wrinkles.

24 thoughts on “The Island with a Past”