No, not that Charles, silly.

A king may have given his name to Charleston, but it was a Charles of another kind all together who bought a piece of unpromising swamp on the outskirts of town; Charles Edmondson, a wiry Scottish Shetland-Islander.

They don’t come much tougher.

Temperatures in the Shetlands, in that subarctic windswept place of stark, bass-relief beauty, peak each year at around 59 degrees farenheit, 15 degrees centigrade during the fat days of August.

Charles Edmondson was a shipping merchant. He had travelled from Scotland half way across the world to the City of Charleston, South Carolina, to a climate of an entirely different kind, to build a life. And he had an eye on the future, and maybe, just maybe, he could see what was on the cards. For though he had bought soggy land unfit for foundations of any kind, three years after his purchase, the City’s planners built a sea wall.

And that changed everything. The land dried out, and was fortified. And before long, it was ready for the foundations of a great house indeed; a house of a very singular kind.

He built a Charleston Single House.

That Charleston thing: sophisticated, simple, ingenious. A long, thin house, just one room thick, extending in a long narrow line perpendicular to the street. And its crowning glory was the development of vast, three storey porches the length of the building, high and wide to catch the prevailing south winds and waft them into the lavish, but utterly hospitable, reception rooms.

A door invariably opened, in a Charleston Single House, from the street into the outdoor piazza. Here was outdoor space reserved for the occupants of the house; a private affair. And when that warm weather arrived, so different from the chilly islands of Charles’s youth, the sea breezes conditioned the heat of the Deep South and made the house habitable.

Alas, Edmonton’s financial difficulties forced him to sell up in 1838, to Charles Alston, whose money was in rice. The building was changed from simple regency to Greek revival, and this new Charles added a third storey. Now visitors were received on the capacious first floor with its 14 foot ceilings: and the top floor could be reserved for functions.

Everyone was building the Charleston single houses: Charleston, and only Charleston, has such places in it, for they are perfectly adapted to the sublime sea winds on that part of the coast.

The piazza was the perfect place to watch strife from afar. General Beauregard, who gave that fatal order to start the cannons bombarding Fort Sumter opposite, stood and watched the whole thing on the porch of the house. General Lee stayed a hasty night there after a fire further into town in the same year, 1861. A furious earthquake in the late 19th century claimed a front porch, and now it stands replaced by sturdy iron.

These days, it’s a house museum, and holds the gazes of those walking the East Battery, quite distracting them from the glittering sea and the crazy hunting pelicans which dip and dive, and the distant hazy forms of the forts which protect the harbour.

The house has watched America change, at first hand, with a front seat.

With heartfelt thanks to Michael Maher, Charleston architect and husband of author Andra Watkins, for a magical tour of Charleston which inspired this post. On his tour, I fell in love with a very similar house to Charles’s. Three storeys, sea view, gorgeous piazza. My photographs today include some of the Edmunston-Alston house, and a few of the house I fell in love with…. 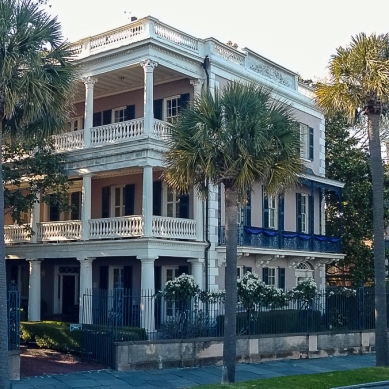 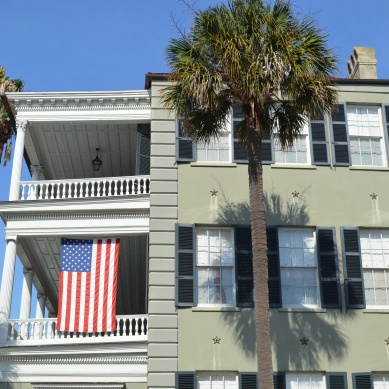 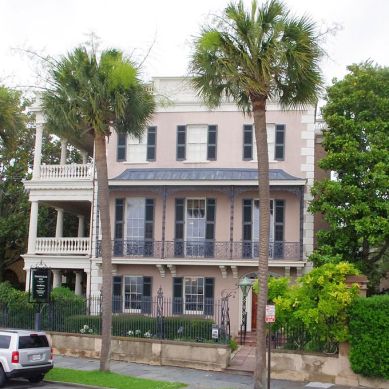 37 thoughts on “The House That Charles Built.”