It works like this: you grind the gold down to grains or paper-thin plates and you heat them until they are red-hot, and the mercury smokes.

And you stir them together.

Eight parts mercury to one part gold, the resultant liquid is squeezed through chamois leather to sift out as much mercury as possible; and you are left with a substance with a consistency not unlike butter.

And then you paint it on your subject. Which, in this case, is a candlestick; and this all happened around the year 1104, some 900 years ago.

The gilding was the final intricate stage in the creation of something simply breathtaking. A candlestick made for the abbot of Gloucester Cathedral, which is so much more than a candlestick. It is a delight to our modern-day eyes, a tumble of symbolism, a sermon in silver, copper, zinc, tin, lead, nickel, iron, antimony, and arsenic.

It is known as The Gloucester Candlestick, and on its neck it carries the inscription: ‘The gentle devotion of abbot Peter and his gentle flock gave me to the church of St Peter at Gloucester’.

It is a glorious menagerie of dragons and apes and dogs and men. Some are heading away from the candle’s light, to the bottom, some towards it to the top. Some have their mouths covered and are kept silent, others have their mouths wide open, hollering.

The strange mix of its composite metals leads historians to speculate it might have been made from a hoard of old coins, melted down.

This incredible piece of visual story has not always lived in England. By the end of the 12th century, it was at Le Mans, evidenced by a later inscription: Thomas of Poché gave this object to the church of Le Mans when the sun renewed the year’

The next we know of it, it was in the collection of a Russian prince and diplomat in 1856. Of whom, I think, more later.

On his death, the Victoria and Albert Museum acquired it, and it came home. And you can see it there to this very day.

I could describe it, but on this occasion no words would match pictures. And if you have not already seen it, it bears a visit should you be walking down Cromwell Road SW7, London. 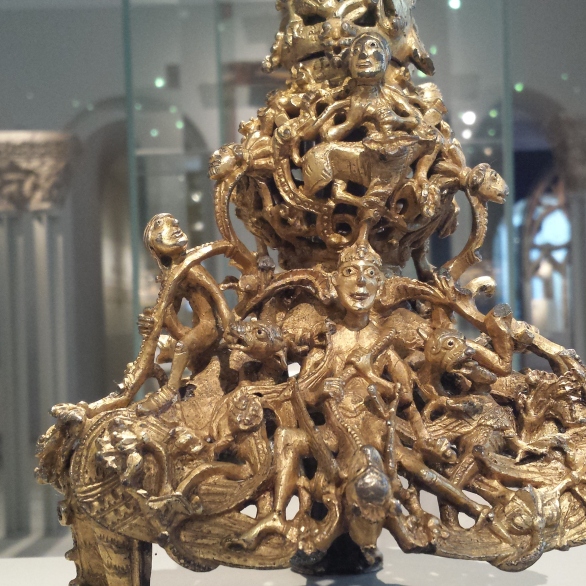 15 thoughts on “A Sermon in Silver-Gilt”