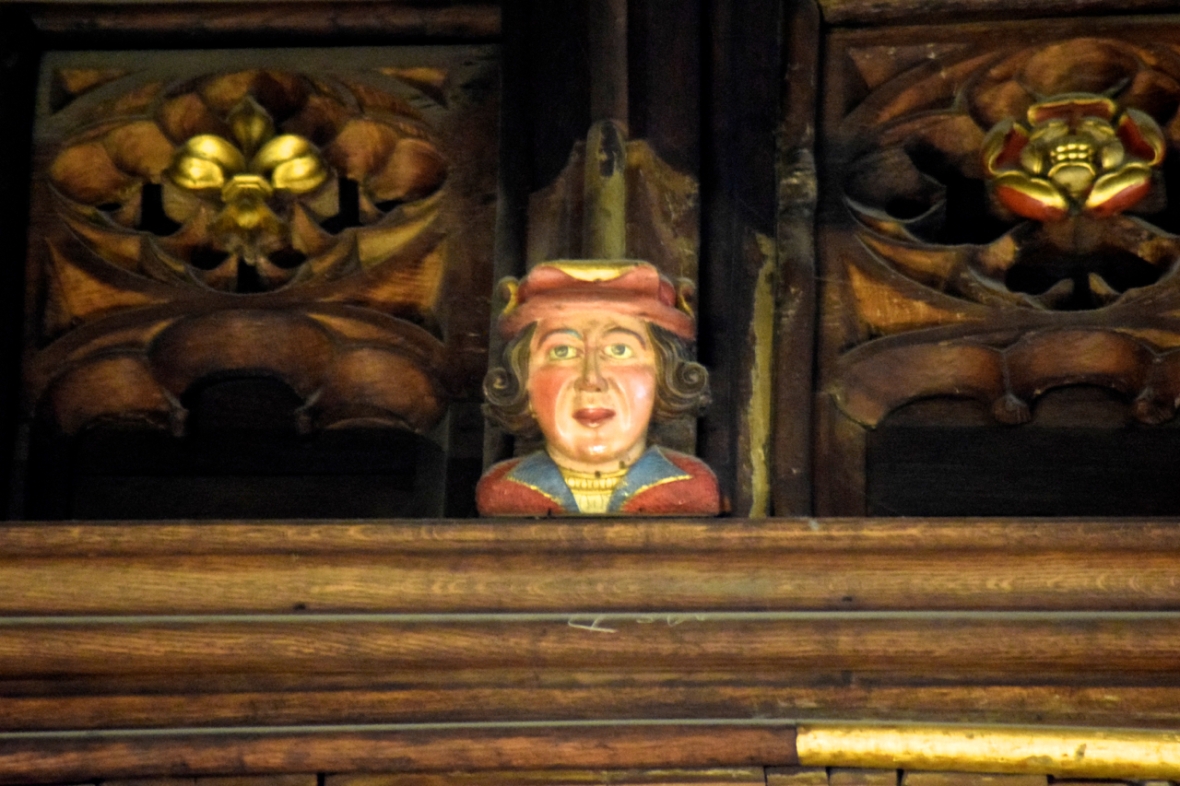 I strode assertively into the Great Hall, much as bluff King Hal had once done.

Hands on hips, feet apart as if astride a colossus, I fixed the red-suited Hampton Court attendant with a jubilant beam.

“Hello,” I said, Julie Andrews-style.
He eyed me uneasily. He had to smile- they all have to smile there- but behind the smile was the conviction that here before him was someone slightly unhinged. And last thing on a Sunday afternoon, too. That type(here he noted the unpredictable light in my eye) that type always turn up at four on a Sunday.

He returned from his musings to find me staring at the ceiling, monologuing.

“I wonder…” I said half to myself and half to the daughter, a few paces behind, who was busy trying very hard not to be in my entourage. “Do you think my new camera will catch them? Could it be possible?”

Passers by would have cricked their necks just looking at me, neck craned, intent on something up there.  It is a busy ceiling at the best of times, commissioned as it was in Henry VIII’s time to express his majesty and supremacy. Gaudy might be the word, except for those eavesdroppers.

You may know them: the head-and- shoulders figures which peer from those ancient rafters. Carved in wood and painted in bright colours, their original purpose: to warn courtiers that there was always someone watching.

Henry did like to intimidate, and he was jolly good at it.

For five years now I have been striding into the Great Hall with cameras great and small and attempting to take pictures of the eavesdroppers. But with my neck craned up to that great ceiling, a fairly murky light and far too much zeal, it has always proved an impossibility for me. I sway ecstatically back and forth like a Rolling Stone groupie who has had one too many phantasmagorical roll-ups. I think I’m standing still but it’s an illusion, a figment of my over excited mind.

When I arrive back home to look at my day’s photographic work, the results are rather like a psychedelic experience: where originally there was just one head I will see four or even five. Reality takes back seat to the unsettling faces of those  a tudor king set to watch his loyal servants.

Until Sunday. Because I arrived in Henry’s hall with a new camera, a camera with fixing-points, an anti-blur artillery. There was just the slightest chance that I might succeed today where I had hitherto failed miserably.

And I threw back my head and aimed the camera, and the world and the wary steward and the shrinking daughter all went away, and it was just me and the four hundred year old spies watching from the ceiling.

And lo: I got one. The new camera curbed my excesses and gave me picture after picture of those coveted faces, which have stared down for centuries on behalf of Henry VIII.

Henry, it seems, is still watching you.