We stood around the local pond: four children, hopping from foot to foot with excitement, and their dad.

This was a Red Letter Moment. My father had been given a kit to make a large and substantial remote-controlled battleship. An engineer to his fingertips, it was with boundless meticulous focus that he spent hours glueing the model together: and now it was time to test the craft’s mettle at Jeanses Pond.

He switched it on. The boat whirred into action, its little propellers flailing the air in pointless but heartening efficiency.

He laid it into the water and we watched in growing horror as it sailed bravely out about two metres and then disappeared gracefully under the water like a submarine.

Jeanses Pond is not the sort of pond you wade in to rescue such things. Quite apart from the quaggy bottom, steep sides and clinging weed, there is a pike with very big teeth in there.

And so the little procession of father and children trailed disconsolately home.

This happens more often than you think to really big boats. Take the Vasa: an extravagant piece of Swedish battle-play, a boat built to vanquish Sweden’s enemies in the country’s war with Poland-Lithuania in the 1620s.

Beautifully crafted, the Vasa was known far and wide as one of the most heavily armed boats of its era. King Gustavus Adolphus liked it immensely as it made him look virtually invincible. It had two full gun decks – not the customary one – and these were stuffed with very heavy bronze cannons.

Alas: the king wanted so desperately to show off, and none of his subordinates had quite the courage to tell him that the upper sections of the hull were dangerously stuffed and making the ship unstable.

The ship sailed as the king had asked: for about 1,300 metres before a slight breeze did its worst, and the vessel capsized, taking untold treasure down beneath the waves and 15 people to their deaths.

It is a little known fact that UNESCO – alias the United Nations Educational, Scientific and Cultural Organisation – keeps a weather eye on all the shipwrecks in all the world.

Of course, it would be impossible to know, to the last timber, how many ships have sunk to the bottom of the sea, but UNESCO say it’s round about the three million mark. And not all of these were caused by storm or mishap. Some were simply scuppered because no-one could think of anything better to do with an old boat at sea.

It is not long since we were last thinking of shipwrecks: and I have been conniving to see the wreck of a very singular one. You can read its story here: The Amsterdam was a merchant ship which had left the Netherlands bound for Java, but was first hit by illness and then foundered in a storm. It came to rest off the Sussex coast at Bulverhythe, where I happened to be running only yesterday morning.

It is sunk neatly in the sand, its midriff exposed at very low tides for all to see, the carpentry still intact, and yesterday immediately after the spectacular light of the super moon it was lit by a rose dawn.

And standing there, it became clear that every shipwreck has its enchantment. It was impossible to imagine its neat form, that proud prow, housing 300 people or more. But house them it did, and it was centrepiece to an epic tale of shipwreck some 266 years ago.

Now it forms a calm sandy boat-shaped lagoon which reflects light and the past in equal measure, to the sound of the waves and the crying of gulls. 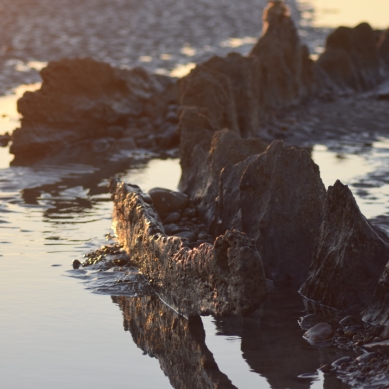 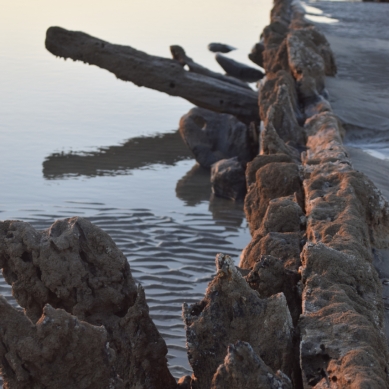 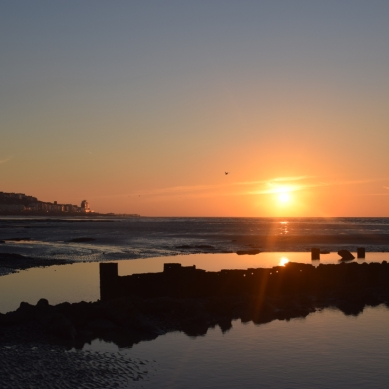 16 thoughts on “Sandbound: Visiting a shipwreck”