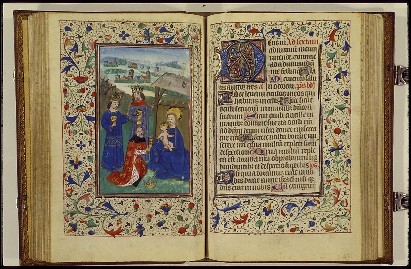 When the perfect conditions exist, and the sky is perfection itself, it seems to acquire a life of its own: a vivacity which looks almost living.

That blue has eluded the greatest artists. Imprison it within a frame and it so often loses its spirit.

There is, however, a notable way of catching it and trapping it, like Tinkerbell in a jar, on a piece of manuscript. If you were a monk in the fourteenth century you would know how to trap the sky on a page.

First, befriend traders who travel to the rim of the known world: to Badakhshan in Afghanistan, a lifetime away. There, since the third millennium BC, they have been mining a rock of extraordinary rarity and stunning beauty.

It is called in Latin and persian  lapis lazuli – sky stone –  and it enchanted Egypt before the Pharaohs came to their grandiose thrones, and was found as tiny beads at neolithic burial sites in the Caucasus and Mauritania, honouring ancient dead. The Afghan mine – Sar-e-Sang – supplied the Mesapotamians and Egyptians, the Greeks and Romans. It was the blue of the Egyptian scarab beetle and of Queen Cleopatra’s eyeshadow.

So you can imagine that with one mine supplying so many for six thousand years, the price of this mineral must be high indeed.

And you would be right. In mediaeval times lapis lazuli was more expensive than gold. Though it must be owned that monasteries, as a rule, were not poor places.

So they would purchase some lapis lazuli at great expense. But the toil did not end there: for the rocks were impure, with veins of calc-spar and iron pyrites in the mix. According to A Baker’s  Common Mediaeval Pigments,  The monks would grind the rock to a powder and mix it with a concoction of pine resin, wax or linseed oil which had been boiled up together. The whole was mixed with lye, a corrosive alkaline substance obtained from hardwood ashes.

Eventually, you could extract the blue colour: the purest in the first batch, which fetched the highest price.

This pure blue mineral, ground to subdue the sky to a page, has a special gift. It carries a radical ion in its makeup: a charge flits between sulphur atoms to create the blue. Vivid, deep, almost alive, the colour dwarfs all others in the manuscripts the monks illustrated.

It had another property, those monks would tell you: for lapis lazuli was a cure for melancholy.

Harry Clifton had come upon a lapis lazuli frieze from China. And he gifted it to William Butler Yeats.

It depicted three monks climbing a mountain to a temple, a bird flying overhead: and all in that impudent blue, the calm front to an atomic tempest beneath.

He loved it: and what he loved he wrote about, there in the years before World War II began, when the women of Dublin were looking not for men of art but for men of action who would protect them from zeppelins and planes bearing bombs.

But Yeats runs his fingers over the lapis lazuli and weaves a story about the two men and their servants who are not climbing to a temple, but to a pub; to survey the mountains from high up, and see clearly what those in the valleys cannot see.

And they, with an ancient wisdom borne of art, transcend the tragedy.

“There, on the mountain and the sky,
On all the tragic scene they stare.
One asks for mournful melodies;
Accomplished fingers begin to play.
Their eyes mid many wrinkles, their eyes,
Their ancient, glittering eyes, are gay. ”

It’s all supposition and storytelling, of course. It’s just a stone.

But a stone which seems to draw the eyes of mankind inexorably to its deep, vivid blue.

Written in response to Side View’s theme: Blue, which you can find here