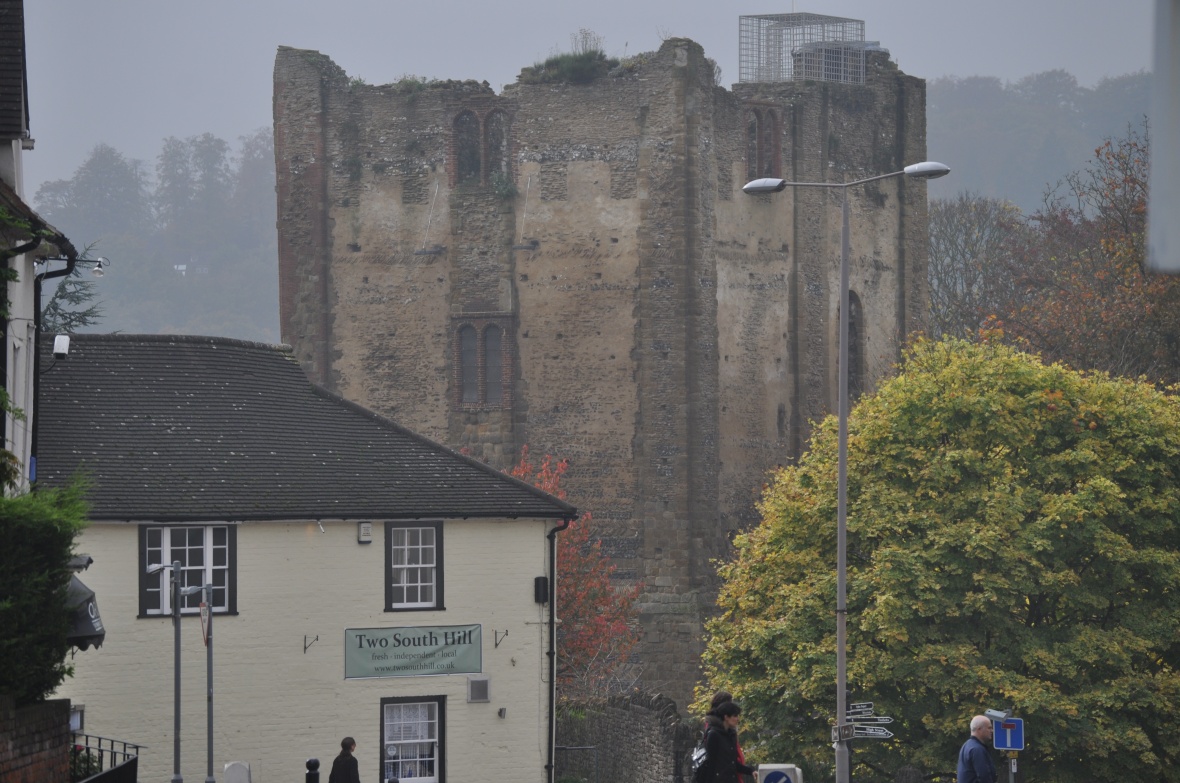 There were other Arthurian cities, of course, as well as Camelot. It would be no fun if there were only Camelot: Arthur and his knights needed other castles full of hordes of characters to mix it up a little.

Just such a city was Astolat: alias Shalott.

It was here the lady sat and weaved her web up there in the half-light of a tower, right until the moment fair Lancelot came and smote her heart. Astolat, Shalott, was the home of the faire Elaine, the inspiration for The Lady, and her father Sir Bernard, and her brothers, Lavaine, and Tirre.

What a wondrous place this Astolat, this Shalott, must be, to be sure.

Suffice it to say that I tackled Shalott’s one way system today. I was fleeced by its astronomical car parking charges, and strolled past its Sainsbury’s supermarket and Argos catalogue store.

Prosaic, yes. For Sir Thomas Mallory, in Le Morte D’Arthur, linked Astolat irrevocably with Guildford in Surrey, an ancient Saxon stronghold which clustered round the River Wey. An affluent place, this Guildford: nestling in the heart of Surrey, it was made prosperous by the arrival of the Royal Mint in 978, sacked by William the Conqueror, who built his castle on the hill; and given a passport to riches in 1653, when the Wey was made navigable all the way to the Thames.

The river which once, in legend, held boats with winsome maidens in, was now a highway for prosperous merchants.

I parked at the Shalott multi storey car park, and ventured out with an itinerary. Museum first, castle next. The mist hung low as if at any moment a knight might appear on his white charger, hurtling past Austin Reed’s on his way to an encounter.

But the museum sent me in so many directions, figuratively speaking. It held a glorious hotch-potch of artefacts, from ancient pagan burial jewellery found opposite the city, to a collection of Victorian toys and samplers, and it informed me that PG Wodehouse was born in Shalott, and Lewis Carroll moved in once upon a time, opposite the castle in Castle Street.

Where in Shalott might I find PG Wodehouse, I enquired?

A brisk 15 minutes later I arrived at a tall, thin Victorian house with a couple of roomy estate cars parked in front. A self-effacing plaque declared that this was where my hero was born. I clicked and gawped like a real tourist.

And then I returned back down the hill towards the castle and the same hotch-potch confusion of the museum jumped out from every street and side- alley.

Because it’s all higgledy piggledy, Shalott. History has been parked there a long time, since legend,really; and there’s no use being sentimental about it when people live and work there. New sits next to – and occasionally on top of – old. Buildings are honoured, but must jostle for their place in the city’s incredibly crowded timeline.

The city of Shalott had its dingy aspects,I noted on my potter,  but they stood alongside stunning moments left over from history. It was bewildering: the view from the hill revealed four fairytale turrets worthy of Hampton Court; a set of almshouses they call a hospital. I stared at them past an orange digger , parked, poised to redevelop a site on the hill. Ancient churches were flanked by satellite dishes; a centuries old city gate, the Angel Gate, was graced by a street cleaner who had stopped to have a chat on his mobile phone. Every shop’s building was ancient, but they bore labels like Jigsaw, and Whistles, and Café Néro.

Shalott is a 21st century version of heritage, indeed.

42 thoughts on “What is left of Shalott”